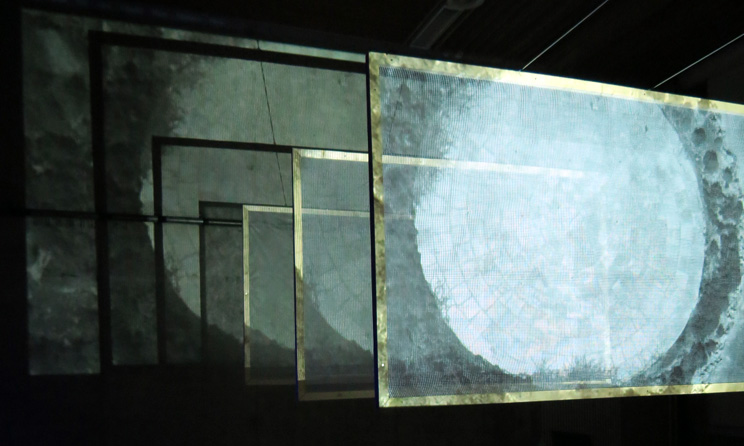 a multimedia installation
by Mariacristina D’Oria and Taufan ter Weel

collective experimentations in the context of the PhD research
University of Trieste, TU Delft, Villard d’Honnecourt

The multimedia installation explores different scientific abstractions produced from the Enlightenment onward in connection with their social and environmental implications. More specifically, we question and contextualise the tensions between the increasingly blurring absolute representations of reality and the relative spacetime of entangled processes by means of architectural diagrammatisation and multimedia experimentation.

To anticipate the uncertainties, the catastrophe we are facing, whether environmental, biological, or social, the multimedia installation explores different scientific abstractions of space and time produced from the Enlightenment onward in connection with their implications for how we engage with the landscape. We question and contextualise the tensions between the increasingly blurring absolute representations of reality and the relative space-time of entangled processes. By means of architectural diagrammatisation, the work cuts across deep time, traceable in geographical strata; the linear time of progress; the cyclical time of seasons, tides, and bodily rhythms; and lastly, nonlinear, relative, and relational concepts of space-time.

It aims to critically examine the concept of tabula rasa, the succession of erasures and superimpositions that constantly reshapes the formation, morphology, and very meaning of landscape. Since time cannot be disentangled from space, and space-time not from matter-energy, we want to take this further and call into question the notion of void or vacuum without matter or energy. As Karen Barad puts it, “the vacuum is filled with the indeterminate murmurings of all possible sounds: it is a speaking silence.” (1)

In resonance with Barad’s words, our installation seeks to explore the complex entanglement we are confronted with today, moving beyond the absolute void, that is, space as an empty container predominant in modern geometry and physics. Instead, it experiments with the delineation of an under-construction map recovering the murmurings with which every place is potentially filled.

The point of departure is the Mojave Desert, central in the current debate about building a nuclear waste repository inside Yucca Mountain. This extreme landscape stands in the collective imaginary as one of the archetypical loci of wilderness, a concept that has been historically instrumentalised to justify colonisation, capitalism, and exploitation. Under the formula “going West,” large territories have been occupied, erasing lives, ecologies, rituals, and practices that densely inhabited these spaces. Critically arguing against the presumed emptiness of these places, rituals and everyday rhythms are retraced in the attempt to retrieve an erased conception of cyclical time from a pre-colonial past: cycles, calendars, myths, and indigenous’ practices begin to emerge, amplifying what is today only a weak trace of these civilizations.

We understand diagrammatisation as a material-discursive process that reconfigures our relation to the world, exploring latent potentials within an associated milieu and suggesting a broader set of relations connecting multiple environments – spaces and times. A diagram is deterritorialised, not bound to a particular territory, scale, and time frame, but allows for drawing trans-spatial and trans-temporal relations and exposes connections between abstractions of space, time, matter, and energy. Moreover, it is an operational device capable of opening up new areas of sensation and intensity. Diagrammatisation entails a focus on technicity: technical processes and objects produced by supposedly enlightened and advanced humanity, enabling us to underline the frictions and discontinuities they generated.

According to the Stoics, time is cyclical: the universe is eternal and evolves following the relentless repetitions of its cycles. In an anthropomorphic fashion, they defined three mythological figures, identifying respectively: Aeon, the eternal time that embraces past, present, and future; Kronos, the linear time defined by the continuous succession of events; and Kairos, the time of crisis and opportunity responsible for the episodic universal conflagrations that open up cyclical ways to rebuild the world.

Following Henri Lefebvre (2), the notions of time and space are understood here as being socially and culturally produced rather than neutral or objective. David Harvey draws on Lefebvre’s dialectics, distinguishing the tripartite division of absolute, relative, and relational ways of understanding space and time. First, there is a certain absolute notion of space and time found in classical Euclidean geometry, the modern Cartesian coordinate system, and Newton’s space as a container isolated from time. Second, a relative conception of space-time can be attributed to Einstein’s relativity theory, non-Euclidean geometries, and a certain shifting sense of space-time, which Harvey calls “time-space compression” (3) and can be associated with technological development or technicity. Last, he identifies a relational approach to space-time, which derives from Leibniz’ monad, wherein space and time cannot exist outside the processes of their unfolding.

This concept of relational space-time opens up the possibility to move beyond a solely dialectical understanding of space and time and provides a point of intersection with Barad’s understanding of practice as being material-discursive (both ontological and epistemological) and matter as an entangled process. Practice is a matter of accountability and “response-ability” rather than objectivity, as Barad, with Donna Harraway, suggests. With regard to the presented artefact, this could lead us to Félix Guattari’s notion of the production of subjectivity and his ethico-aesthetic approach, emphasising the irreversibility and responsibility inherent in the creative act. (4)

The multimedia installation puts into operation the diagram, performing an exploration across, on the one hand, different abstractions of time and space, and on the other, the entanglements between various landscapes in formation, generating a warped cross-section or archipelago of places and multitude of times linked by the resounding echoes of exploitation.

In the beginning there is noise, white noise. According to Gauss, white noise contains all frequency components distributed throughout the entire spectrum with equal intensity and implies that every two instances in time have different values – there is no correlation in time, no repetition. Immersed in this vast sea of all possible tones, the audience is facing Aeon, eternal time, endless space. From this infinite field of possibilities, the installation renders an aerial view of the Mojave Desert and two panoramic views of the Grand Canyon, immediately questioning the temporal scale of this landscape exposed by its geological strata: the endlessness of its formation in deep time.

This landscape is the empty surface and playing field of colonial and capitalist practice. Two sites of exploitation emerge from the desert: Yucca Mountain and Nevada National Security Site, where nuclear testing not only contaminated the native’s land but erased their entire existence. They trigger the unfolding of a multiplicity of landscapes exposed to similar processes of colonisation and erasure. A collage and ten panels show different spaces and times, geographically and historically separated but nonetheless connected by being subjected to imperialist and colonial exploitation such as nuclear testing and military use justified by being supposedly deserted islands.

The sonic space consists of generated sounds (through computation and synthesis) and field recordings made in different places in the world. The recorded landscapes and concrete rhythms are convolved with and modulate or trigger generated sounds and stochastic processes; fixed media are combined with self-generative processes. The sounds are distributed to four loudspeakers composing an artificial landscape. Synchronised with the sound, the moving images are projected on different surfaces and semi-transparent layers, creating an entanglement of interrelated landscapes, maps, and abstractions of space, time, matter, and energy. The environments are manipulated again: the linear time of progress and capitalist expansion cuts across the cyclical rhythms, radically disrupting and rearranging them. Isolated fragments and sites start to be connected by these processes of colonisation, moving from stochastic probability distributions (space-time-matter-densities) to interactions between linear and cyclical rhythms back to noise.
The installation becomes a continuous reciprocal rhythm and relational diagram in itself.

Roberto Cavallo, Giovanni Corbellini, and Heidi Sohn for their continuous and extensive support.

In addition, I personally thank Andrej Radman, Stavros Kousoulas, Patrick Healy, and the Ecologies of Architecture research group at large for the discussions, reflections, and references relevant to this project, and Jeroen Molenaar for the inspiration with regard to the projection technique.